The promo formerly known as Ultimate Scream is back for FIFA 22. But, which Ultimate Team cards will get the upgrade?

It’s nearly time for the Rulebreakers Promotion, EA Sports inclusive update of Ultimate Scream. For FUT 22, it represents the first really fun promo of the year. Will it revive the transfer market? Can it live up to the hype? Will anyone who isn’t a content creator actually pack one of these? Let’s find out – time for some Rulebreakers predictions. 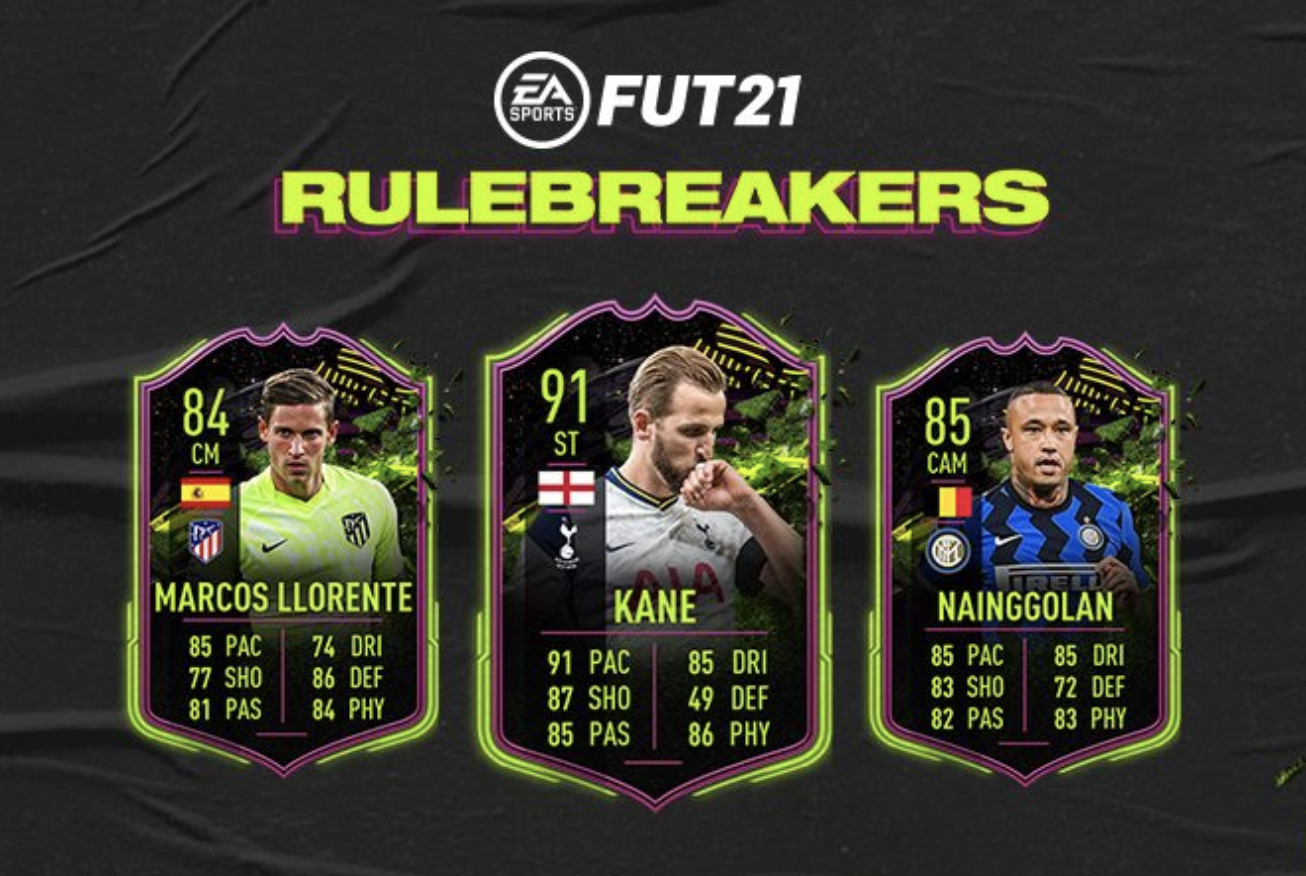 Let’s remind ourselves how it works: basically, players see one stat boosted to god-tier levels, but might take a downgrade elsewhere. The point is to change the style and utility of the card. That 91 pace stat turned Kane into an English Ronaldo, Nainggolan became a creative menace with that pace/dribbling combo and Marcos Llorente became more of a traditional CDM rather than a box to box player.

But, because it’s so random, predicting who’s going to be in the promo is difficult: it’s not based on any real life events, just a stat boost for players you never expected to terrorise you in Division Rivals for the rest of the season. We’re looking at you Lucas Ocampos!

Why did they scrap Ultimate Scream?

Back in the glory days of FIFA 20, Ultimate Scream was everyone’s favourite promo. But, Electronic Arts is moving with the times and scream is dead. They want to make sure every promo is inclusive and accessible to people of all cultures, which means there’s no clear Halloween theme.

FIFA 20’s Scream promo splits opinion to this day. But we absolutely loved it – there are some real hall of fame cards in there. Our absolute favourite was this Adama Traoré. With pace and power for days, a shooting boost made him a real weapon.

Moving into FIFA 21, the first Rulebreakers promo threw up some awesome cards. Honourable mentions should also to go: CDM Pogba, CB Gimenez and this banger of a Marco Reus. Don’t say it took loud, but he seems to have been recycled for RTTK this year!

Thanks to Lifestylebrot, SEBFUT and @MolyneuxLuke for these awesome Rulebreakers Predictions. With cards across all the major leagues: it’s hard to know if any will be in the promo. But, a faster Kroos, a usable Ibra and that Antony concept card look incredible!

Saint-Max is always a firm favourite – his freeze card last year was outrageous. We would love to see another boosted version included: maybe with better finishing? That Nuno Mendes card would change the picture for Ligue 1 players too.

It’s a great opportunity for EA to create some cards for players who might not get frequent in-forms or upgrades. Erling Haaland is injured at the moment with no prospect of a Team of the Week on the horizon – could we see a super agile Haaland making an appearance?

For us, the pick of the bunch here is that TAA – pace is the only thing that normally lets him down – he’d offer an amazing goal scoring and creative option from RB – with stats like those you could play him at CDM.

We love the look of this Rudiger card, representing the Premier League. It actually isn’t that far off reality – have you seen those driving runs from CB? And speaking of driving runs, that Luke Shaw looks a bit tasty!

Elsewhere, an Aguero special card would really add to La Liga, which is pretty underpowered in terms of STs. And we actually would like to see Gosens in the team, if only top stop him relentlessly appearing in every pack we open.

SEBFUT has gone for the big guns! OP Witsel special cards are a FIFA tradition, and we’d love to see him make an appearance. It would be great to add Pedri, Dybala and Lemar upgrades to the game too. It’s so frustrating when great players IRL are unusable in the game. Promos like rulebreakers offer a way back in for those cards.